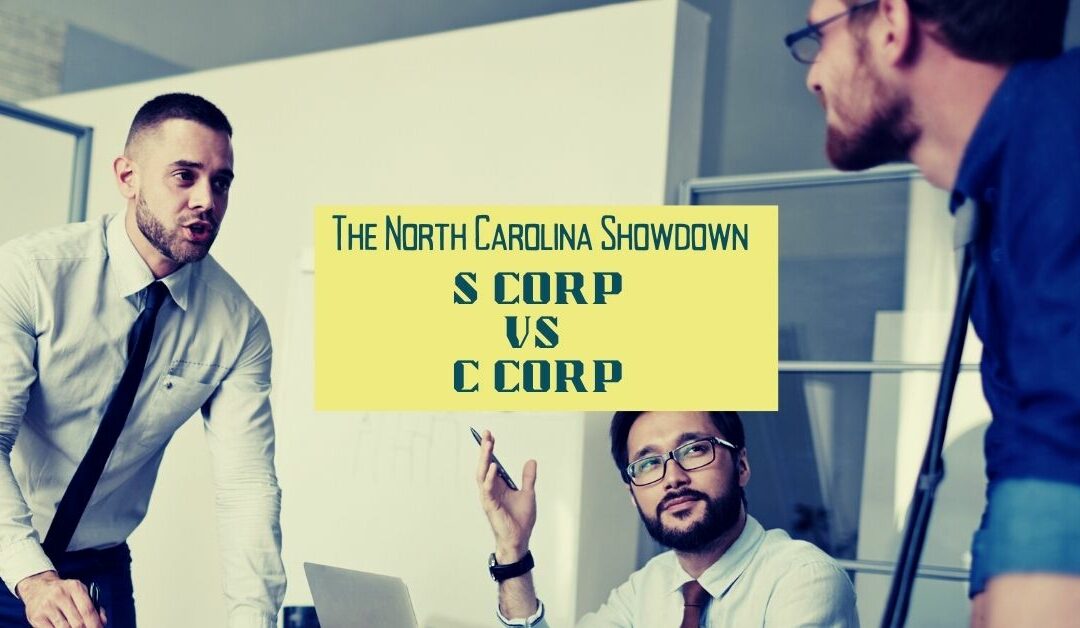 When starting a new business, one of the first decisions you’ll need to make is what type of business structure you need. There are many different types of entities to choose from, but two of the most common are the S corp and the C corp. Both have pros and cons, so deciding which is right for your company can be challenging. Let’s look at the differences between an S corp vs C corp in North Carolina and see which one comes out on top for your business!

What is an S Corporation in North Carolina?

An S corporation is a corporate business entity that has elected to have the Federal government tax it as a separate entity from its shareholders. An S corp itself does not pay taxes on its income. Instead, the shareholders are responsible for paying taxes on their share of the company’s profits.

Businesses often call S corps “pass-through entities” because the profits and losses of the company are “passed through” to the shareholders and reported on their individual tax returns.

S corps must have 100 or fewer shareholders and can only issue one class of stock.

What is a C Corporation in North Carolina?

A C corporation is a corporate business entity taxed separately from its shareholders. A C corp pays taxes on its own income, and then the shareholders also pay taxes on their dividends. Paying twice is often called “double taxation.”

C corps can have an unlimited number of shareholders and can issue multiple classes of stock. In NC, effective for tax years beginning on or after January 1, 2019, the state tax rate for C-Corporations is 2.5%. (1)

Benefits of Both S Corps and C Corps

There are some benefits that both S corps and C corps share. For example, both entities offer their shareholders limited liability protection. This means that the shareholders are not personally liable for the debts and liabilities of the corporation.

Another benefit that S corps and C corps share is that they can exist indefinitely. As long as the shareholders continue to own stock in the corporation, it can continue to operate. Other business structures, like partnerships, dissolve when a partner leaves or dies.

The main benefit of an S corp over a C corp is that the S corp is not subject to double taxation. This “pass-through” taxation can save the company and its shareholders significant money in taxes.

Another benefit of S corps is that they tend to be less expensive to set up and maintain than C corps. Often, S corps cost less because of fewer compliance requirements, such as holding shareholder meetings and preparing corporate minutes.

Finally, S corps are often more flexible than C corps when dividing profits and losses among shareholders. This flexibility can be helpful if the shareholders are also employees of the company, as it allows them to receive a more significant portion of the company’s profits without paying higher taxes.

One main benefit of C corps is that they can raise capital more efficiently than S corps. C corps often have an easier time going public than S corps. This ease is because C corps have a more straightforward ownership structure and are subject to fewer regulations for going public.

When it comes to s corp vs c corp, there are a few key differences to consider. The answer to which structure you need depends on several factors, including your company’s size, ownership structure, and tax goals.

However, C corps can raise capital more easily and often have an easier time going public. It’s easier for C corps to go public because they can sell shares to investors in exchange for money or other assets.

So, which is the better choice for your North Carolina business? Ultimately, it depends on your specific needs and goals. If you’re looking for a more straightforward structure with less paperwork, an S corp might be the way to go.

On the other hand, a C corp could be a better option if you’re looking for a more complex business structure with the possibility of issuing multiple classes of stock, raising significant capital, or taking your company public.

Your answer depends on your specific needs and goals. Still not sure which is right for you? Talk to an experienced business attorney in North Carolina to get expert advice on which type of corporation is best for your business.

At Hopler, Wilms, and Hanna, our experienced North Carolina business attorneys can help you get set up and ensure that you comply with all state regulations. We work with businesses across the state from the start-up phase of tax structures to contracts, negotiations, employee issues, mergers and acquisitions, and more.

Give us a call today to schedule a consultation. We’ll help you figure out the best way to move forward with your business goals.