Another Name for a Pyramid Scheme: Multi Level Marketing 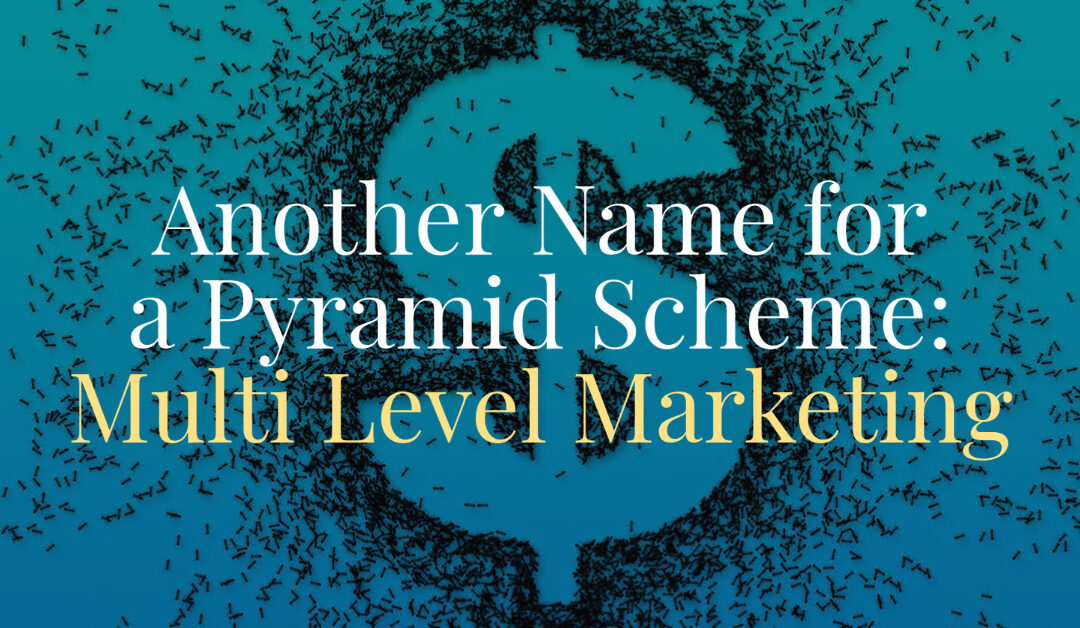 What is a Pyramid Scheme?

According to the NC Department of Justice, “many companies that operate through network or multi-level marketing are in fact pyramid schemes. Promoters often claim that their program is legal because a product or service is offered. However, under North Carolina law, a pyramid scheme is any plan in which a participant:

Usually, in a pyramid scheme, the people at the top of the pyramid create marketing materials promising enormous rewards for being a part of the network. The marketing often displays untrue testimonials to entice others to join while promising massive future earnings. Recruited people, in turn, recruit more people. Only the very top earners make the promised enormous income.

The top owners and creators get wealthy on the people’s backs at the bottom. Individuals in the middle might make a small amount of money. The people at the very bottom of the pyramid may work hard and make nothing. So the structure of the business is a pyramid shape.

Who Runs a Pyramid Scheme?

In 2016, the FTC charged Herbalife saying that “the multi-level marketing company’s compensation structure was unfair because it rewards distributors for recruiting others to join and purchase products in order to advance in the marketing program, rather than in response to actual retail demand for the product, causing substantial economic injury to many of its distributors.”

The FTC also claimed that Herbalife practiced unfair and deceptive business practices by making untrue claims about what would happen when you joined their sales network. They enticed network members into joining with claims of wealth, the ability to quit other jobs, earn thousands per month, and make a career-level income.

Herbalife paid out 200 million in damages and agreed to restructure its business practices. Before the FTC ruling, Herbalife rewarded recruitment over actual sales of the product. This practice of paying for recruitment instead of direct sales sets up a company to make money at the top but not at the lower distributors’ level, making it a pyramid scheme. Now that Herbalife has restructured from top to bottom, their focus is more on direct sales to customers vs. how much product a distributor orders.

Because Herbalife was such a large organization, it faced the scrutiny of the FTC. However, countless other MLM organizations work as pyramid schemes.

What If I’m Part of a Pyramid Scheme?

Law enforcement tends to tackle a pyramid scheme if it hurts large numbers of people at the bottom of a pyramid scheme. Many multi-level marketing companies are working on restructuring their business based on Herbalife’s charges in 2016. However, if you work for a multi level marketing organization, you could face charges.

According to the NC DOJ, “In North Carolina it is a felony to establish or operate a pyramid scheme, and someone who promotes or participates in one can be charged with a misdemeanor.” If law enforcement tackles your company next for prosecution, you could face charges, even if you are a middle-level participant. Here’s how to know if you are a participant in a pyramid scheme.

If you wonder if a job opportunity is actually a multi level marketing company or pyramid scheme, think first. Consider these factors from the NC DOJ site on pyramid schemes:

If you face charges for a pyramid scheme and need help finding your way through the judicial system, our legal team at Hopler, Wilms, and Hanna can help. We work within the criminal justice system to help prosecutors hear your voice. We understand that criminal behavior is not always intentional, and you may need help to find your way out of this legal nightmare. Even if you created the pyramid scheme and face felony charges, you have the right to an attorney who argues your defense. In the past, we’ve worked to bring about reduced or dismissed sentences for felony-level criminal behavior. We want to do the same for you. Contact us today and find out how we can help you.