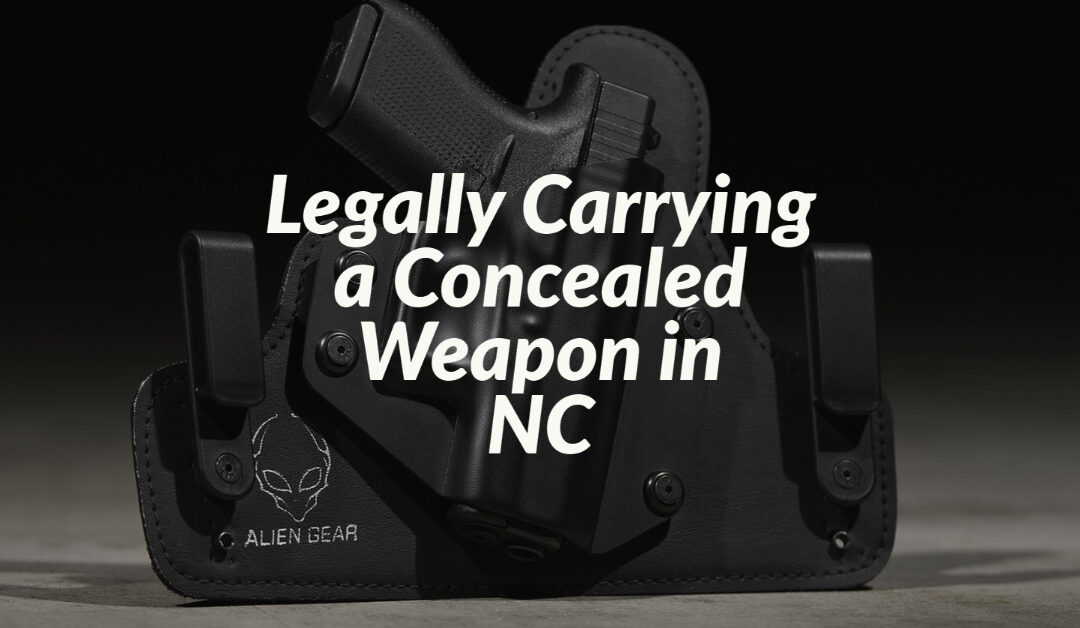 The laws for open and concealed carrying of weapons in North Carolina can be unnecessarily complicated to figure out. Rules abound at the Federal, state, county, and town levels. You may have carried around a large knife for protection for the past 50 years in a jacket pocket. But is that legal? Whether you claim ignorance of the law or not, you can face charges for carrying a concealed weapon. Let’s look at the laws in North Carolina about carrying a concealed weapon.

Some guns and weapons are always illegal when carried concealed unless you are on your own property. No permit makes it legal to have these weapons in a concealed manner:

Carrying a weapon does not mean you’ll always face charges. There are defenses to concealed carry listed in the NC written statutory law if you do face charges.

Open carry of many weapons is legal in most areas. For example, if you run for exercise with an open carry stun gun “flashlight” and someone attacks you, you can use your stun gun legally to defend yourself. At a Charlotte-area bus stop in 2019, a 23-year-old woman used a stun gun to fight an attack from behind by a knife-wielding man. (1)  Carrying mace or a stun gun openly is legal as long as you don’t carry it to terrify or alarm the public.

Because some stun guns can look like ordinary cell phones or flashlights, it is not intimidating to others when you carry them openly. Mace is not generally alarming to the public at large either.

North Carolina law condones the open carry of any legal weapon. HOWEVER, there are specific places where a stun gun would be illegal even when carried openly. In certain situations or events open carry is always unlawful. It is illegal to open or conceal-carry any kind of knife or other weapons:

What About My Pocketknife?

It is legal to conceal carry an ordinary pocket knife, designed for carrying in a pocket or purse as long as you keep it in a closed position with the cutting edge enclosed by its handle. If you can open the knife by throwing or spring action, though, it is still illegal.

You may openly carry certain weapons without law enforcement charging you with a crime. These include mace, stun guns, and even sometimes guns or knives, but the laws vary, so always check county, city, and town ordinances before openly carrying a weapon.

What If I Face Weapons Charges?

If charged with concealed carry or illegal open carry of a weapon, your best defense is one of these options according to NC law:

If you face charges for a weapons crime, you need an attorney who understands the law. Because the weapon laws in North Carolina are open to interpretation, it’s wise to consult an attorney who can mount a defense to prevent criminal charges. At Hopler, Wilms, and Hanna, our knowledgeable criminal defense attorneys stand up for you. We investigate each case to see if law enforcement violated your rights or there is a lack of evidence. Often, with our experienced attorneys, you can receive reduced or deferred charges. Sometimes our work with prosecutors brings about dismissal of a case. Contact us today and see how we can help you fight for your best outcome.