What is Simple Assault? 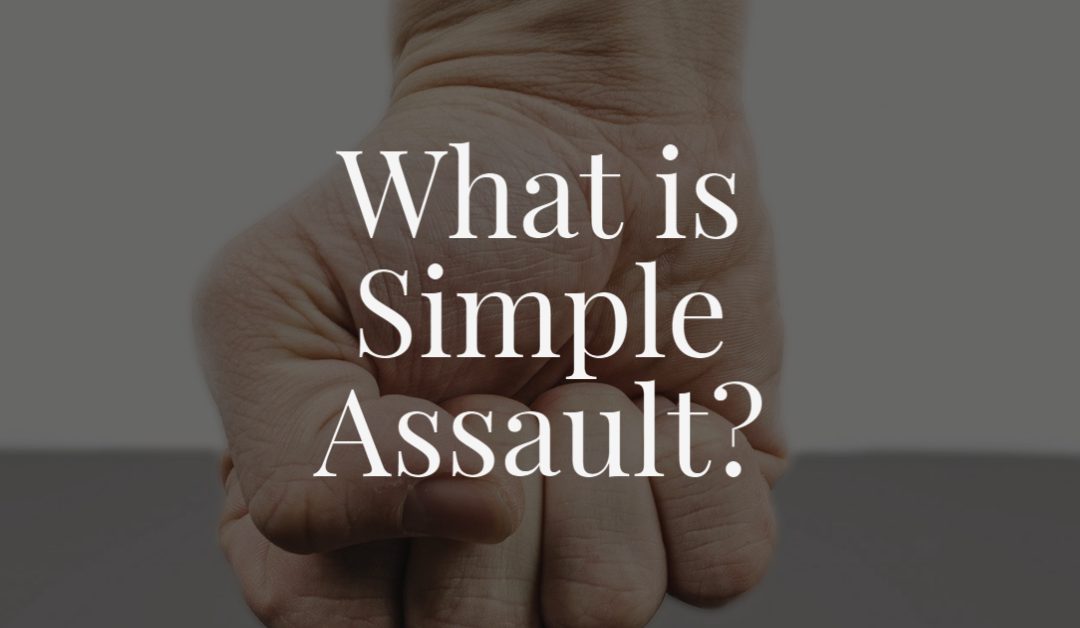 If you threaten someone with force that suggests physical harm will follow, you’ve committed simple assault. This is the least serious assault offense and can include merely threatening another with bodily harm. You do not have to touch someone physically to face simple assault charges.

In North Carolina, you can receive an “assault and battery” charge. This charge means you’ve not only threatened harm with words or gestures but that you’ve also caused physical injury to another. If you attempt to assault or show that you’re about to commit an assault and battery, you can face charges of assault.

Whether or not the police are involved can determine whether you will face conviction of this crime. No one wants a criminal record, so let’s look at what simple assault is and how it can affect your life in the future.

Even when assault charges are misdemeanors, they are still considered violent crimes and come with a criminal record. If convicted of these crimes, they are on your record for life. North Carolina does not expunge violent crimes.

With a knowledgeable attorney on your side, it is possible to avoid a lifelong criminal record. A misdemeanor record can affect every aspect of your life, from your education and career to your apartment lease options or mortgage possibilities.

If your assault charge involves a deadly weapon or causes injury to another, your charges increase to an A1 misdemeanor. A1 misdemeanors bring a maximum penalty of 150 days in jail and a discretionary fine. Spending more than half a year behind bars and paying a fine in the thousands of dollars is not pleasant. This is a serious crime on your record and can cause you to struggle to get a job or lease an apartment.

You can also receive a class A1 misdemeanor if you assault (even misdemeanor level assault) a protected class such as a:

Beyond the misdemeanor charges, felony assault charges come with severe penalties. You can be charged with a Class C felony if you assault another with a deadly weapon causing serious injury AND you had the intent to kill. Saying you will kill someone and then causing the person serious injury comes with a minimum prison sentence of 44-98 months.

If you have an assault charge, find an experienced criminal law attorney to represent you to the full extent of the law. A knowledgeable attorney can mount the best defense for your unique case, whether it involves self-defense or collecting and using witness statements. Rely on us at Hopler, Wilms, and Hanna to know the next step to getting out from under your criminal charges and living your best life again.