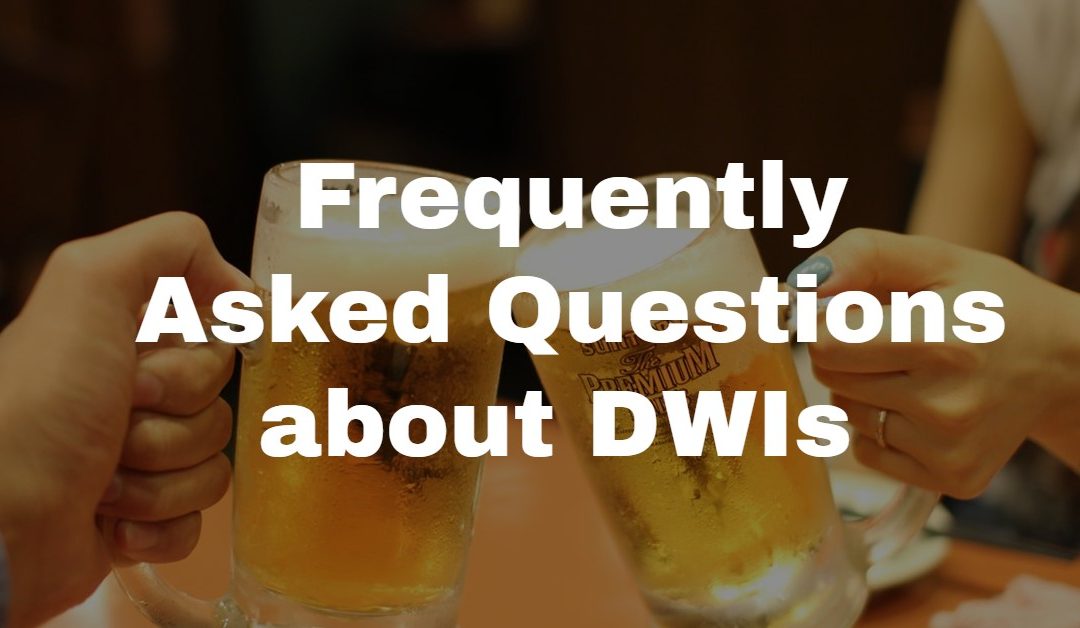 Most people have heard of the “Booze it and Lose it” campaign in North Carolina. The majority of the public is aware that driving while intoxicated is an arrestable offense, yet each year roughly 1.5 million Americans are arrested for this exact offense. If you find yourself in this situation, you are probably going to have a lot of questions about what to do.

WHAT DOES NORTH CAROLINA DEFINE AS DRIVING WHILE IMPAIRED?

WHAT ARE THE LEVELS OF DWI IN NC AND THEIR PENALTIES?

WHAT FACTORS MAKE A DWI A FELONY CHARGE?

CAN YOU REFUSE TO TAKE THE FIELD SOBRIETY TEST?

If an officer has probable cause to believe that you are incapacitated, then they can ask for you to complete a field sobriety test. You can refuse to take these tests. It is important to remember though, that refusing can look even more suspicious. If you believe you are not impaired or know you are not impaired, it can be in your best interest to perform these tests. However, if you are impaired and perform these tests it can simply give the officer more evidence against you.

CAN YOU REFUSE A BLOOD ALCOHOL CONCENTRATION (BAC) TEST?

Legally you can refuse to take a BAC test, but be prepared to have your license revoked on the spot. Driving is not considered a right, rather, it is a privilege. In North Carolina, there is an “implied-consent law,” which means that if there is suspicion of you driving while intoxicated, as part of having a license you have already consented to taking the chemical analysis. If you refuse, your license will be revoked at the time of arrest for 30 days and even if you are not convicted of a DWI you will lose your license for up to a year.

DO YOU HAVE THE RIGHT TO SPEAK WITH AN ATTORNEY PRIOR TO SUBMITTING A BLOOD OR URINE SAMPLE?

The answer is yes. However, there are stipulations to asking for an attorney prior to submission of a sample. This cannot be used as a stall tactic, because one only has 30 minutes from the time they are notified they have the right to consult with an attorney prior to submission to actually submit a sample. After the 30-minute window has elapsed, an individual will have to submit a sample even without consulting with an attorney. If you cannot reach an attorney you are also allowed to contact a witness to come, but they have the same 30-minute window.

CAN YOU DRIVE PRIOR TO A COURT HEARING AND CONVICTION?

This really depends on the circumstances surrounding the individual’s arrest. After 10 days there is a limited driving privilege available, if granted by a judge. If it is a first offense, a judge may grant a limited license if the individual did not hurt anyone, did not have a child under the age of 16 in the car with them and if the driver obtains a substance abuse assessment. In order to have an individual’s license restored at the end of the one-year period, the individual must have received treatment as recommended by the assessment they received.

DOES A DWI CONVICTION SHOW UP ON YOUR RECORD?

Yes, in North Carolina a DWI conviction is public record and will show up on a background check.

CAN A DWI AFFECT YOUR PLACE OF EMPLOYMENT OR ABILITY TO FIND WORK?

North Carolina is a right to work state, which means that your place of employment does not have to have a reason to let you go, unless that reason is against anti-discrimination statutes or violates another law. So yes, if you are arrested for a DWI in North Carolina it can be up to your place of employment as to whether they retain you or not. Also, certain professional licenses may have rules and regulations pertaining to criminal charges, so you may be facing a suspension of your license.

CAN A DWI CHARGE BE EXPUNGED FROM A CRIMINAL RECORD?

North Carolina laws on expunctions are limited to what they will allow to be expunged from your criminal record. It can be possible to have this offense removed from your record if it is dismissed in court or one is found not guilty. Overall you would need to speak to a qualified attorney about expunction laws and your personal record in order to find out if your charges are eligible for expunction. North Carolina expunction law currently does not allow for an expunction of a DWI conviction.

WHAT IF YOU ARE CONVICTED OF DWI WHILE DRIVING ON A SUSPENDED LICENSE?

You could permanently lose your license and NC can seize and sell your car.

HOW CAN A DWI AFFECT INSURANCE RATES?

Being charged with a DWI can affect your rate of insurance because you are assessed as a higher risk of liability. Most likely an insurance company will raise their rates due to the liability associated with covering you. A DWI conviction can add up to 12 points to your insurance record and cause a very large increase for your rates. After you are convicted, your premium will remain high for three years.

CAN YOU STILL BE ARRESTED EVEN IF YOU BLOW UNDER THE LEGAL LIMIT?

WHAT IF YOU HAVE AN OUT OF STATE LICENSE?

The process can take a while, so you may believe that you are in the clear and then one day receive notification that the DMV is revoking your driver’s license for a certain period of time. Or if you are convicted in another state of DWI, know that eventually North Carolina is going to find out and you will still be punished under North Carolina statutes for DWI.

WHAT IF THE OFFICER DID NOT READ MY RIGHTS TO ME?

While your rights being read to you when it is required does not mean that your charges will be dismissed and the case will be thrown out. It simply means that any statements you may have made would be suppressed, along with any evidence that was gathered because of those statements. If this were to happen during an arrest for DWI, you would need to speak with an attorney to determine if there are actual grounds for moving to dismiss your case.

WHAT IS AIDING AND ABETTING?

If you give the keys to a known driver who is impaired, this is considered aiding and abetting. If you are convicted of this offense it carries a level 5 DWI, which is the least severe type of DWI, but still comes with fines, court costs and the possibility of jail time.

DO YOU NEED AN ATTORNEY FOR A DWI?

A DWI charge is like any other legal matter and retaining an attorney is completely up to you. However, keep in mind, a criminal attorney is a specialized licensed individual who knows the law. Driving while intoxicated is a very serious offense in North Carolina and comes with heavy fines, court costs, community service and the possibility of jail time. An attorney can help ensure your rights were protected at the time of the arrest and that all protocols were followed. They are also able to instruct you on what to do prior to your court hearing in order to get the best possible plea bargain. While one may think it can be expensive to hire an attorney, it may be in your best interest.

If you’ve received a DWI and wish to set up a consultation with our firm, click here.